Achroite is a colourless, translucent variety of tourmaline. It is classified as one of the elbaite group of tourmalines. [1] 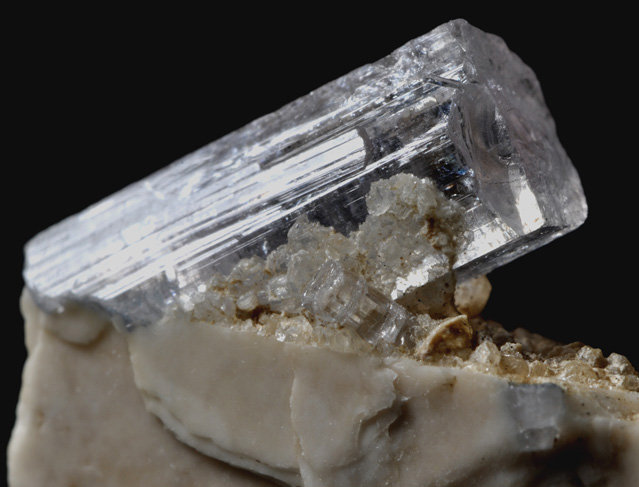 Achroite is the least common of the tourmaline varieties; it's considered rare but can be obtained through traders and is, curiously, less expensive than the other transparent tourmaline varieties [2]. Achroite is less expensive because it has no color; yet another demonstration of the importance of color in the world of gemstones! Achroites can be found on sale unfaceted, faceted or in cabochon form (meaning that they have been shaped to have a domed top surface; often cut this way so as to be mounted in rings, earrings or other jewelry.)

Like other tourmalines, achroite exhibits the quality of piezoelectricity - and they also become electrically charged when warm - enough as to attract particles of dust. For this reason they were used to clean pipes in old times! [5]

Tourmalines were first discovered Dutch traders in the late 16th and early 17th century. [6] However, the earliest mention of Achroite I can find in literature available online, comes from scientific journals of the 1840's. At this time, the chemical composition and mineral structure of Achroite had been analyzed - and James Nicol's 1849 Manual of Mineralogy lists the results of the chemical analysis of Achroite in a chart with other tourmaline varieties. It's interesting to note the opinion of tourmalines as gemstones at that time: Nicol writes "Tourmaline is not much valued as a gem, the colors being rarely pure." [7] Nowadays, some tourmalines are prized especially because they contain more than one color in one stone - such as Watermelon Tourmaline.

Achroite has now been found in Afghanistan, Bolivia, Czech Republic, India, Madagascar, Nepal, Sri Lanka, the UK and the USA. [8]