Morion is a name used for smoky quartz that is very dark brown / black and opaque. The name "morion" derives from the name for smoky quartz in several European languages - including German and Spanish.[1] Morion may occasionally be seen cut into gemstones but is more common as an unfaceted crystal in mineral collections. 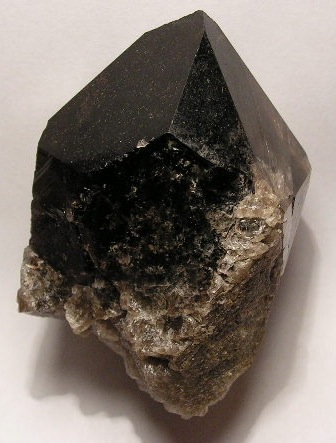 The coloration of naturally-occuring Morion, interestingly, is believed not to have formed when the crystals "grew", but was caused by natural radiation which affected the crystals after they were fully formed. It is possible for this effect to be replicated in the lab. As a result of this, some smoky quartz on the marketplace is either created or darkened using radiation, and it is very difficult to verify whether the morion is natural - although it's said that artificially irradiated quartz may often be "suspiciously black". [3]

It's also said that if the morion still has some of its matrix (the rock that the crystal grew out of), this may be of assistance to the expert in identifying whether the stone is natural; as morion only occurs in certain types of geological environment. I have read that dealers are obliged to state whether irradiation has been used, but this may be difficult to verify if the stones originated somewhere on the other side of the world. [3]

Morion is typically found in other locations where quartz is found - with the most significant producers being Brazil, Scotland, Madagascar, Switzerland and Australia. [2]

The use of the word morion to describe this stone is decidedly old. It is thought by some writers to be the Mormorion of Pliny - which he described as being a transparent, deep black stone [4] - and although at first glance this seems likely, there is great difficulty in accurately identifying precious stones mentioned in ancient texts. Some writers state that the Mormorion of Pliny was black tourmaline. [5]

Morion is mentioned in the 1798 "A Description of the Minerals in the Leskean Museum, Volume 1" (p.58); where morion is described as "Very dark brown, nearly black, Rock Crystal" [i.e. quartz]. Digging further back to Henry Curzon's 1712 The universal library; or, Compleat summary of science, morion is described as "a Gem of a very Black Colour"

Digging deeper still into the dusty vault of the epochs, Morion is described in Anselmus de Boodt's 1647 Gemmarum et Lapidum Historia, written in Latin. However, this work reckons the Morion of Pliny, also called Pramnion, to be the onyx. [6]

Pliny himeslf states that Morion is a "translucent black stone", also called Pramnion, and was used in Egyptian sculpture. [7]

A morion is also the name of a type of helmet worn in the 16th and 17th centuries. 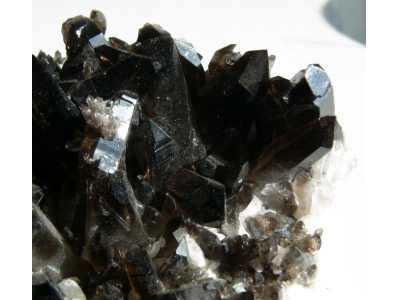