Bloodstone is a type of chalcedony, typically dark green overall and characterized by its patches of bright red coloration, reminiscent of spots of blood, which are caused by iron oxide. Chalcedony is the name given to cryptocrystalline quartz (i.e. quartz composed of crystals too small to be seen with the naked eye.) 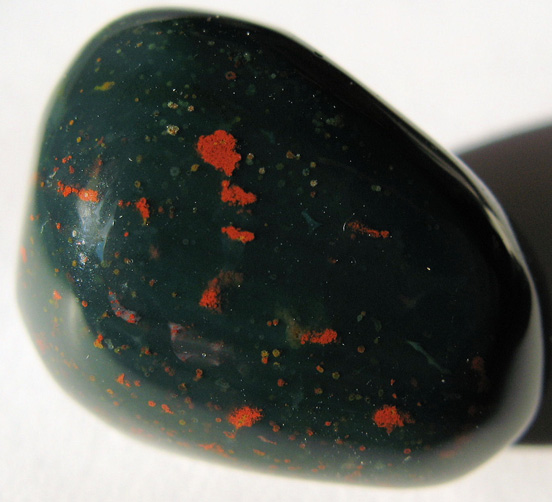 Bloodstone is also known as heliotrope although this name can be confusing as heliotrope is also a type of flowering garden plant (Heliotropium Arborescens), and also a name given to the pink-purple color of its flowers. The name heliotrope derives from the Greek words for "sun" and "turning" - and the stone was described by Pliny: "A leek-green stone veined with blood-red, the latter so abundant as to give a general red reflection to the whole when it was put in water in the face of the sun." [1]

Bloodstone is also sometimes referred to as blood jasper - but although both bloodstone and jasper are types of chalcedony, bloodstone is not actually a type of jasper. [2] This attribution may have been acquired due to bloodstone's speckled appearance; as jasper is typically spotted.

In the past, bloodstone has also been used as a name for hematite, a very different stone, and care should be taken to avoid confusion between the two.

Bloodstone is relatively common, fairly inexpensive and is often seen in the form of beads, tumbled stones, "palm stones", in ornamental objects and in jewelry settings. It was revered in ancient times and like other chalcedonies, was carved, often into miniature intaglios such as the one in the image.

A rich mythology surrounds bloodstone. Christians have an old legend that during the crucifixion, the blood of Jesus gave the stone its color when it fell on some jasper at the foot of the cross. The stone was used by medieval Christians to carve symbolic objects depicting martyrdom, and acquired the nickname 'the martyr's stone". One of the most famous of these pieces, the "Descent from the Cross" of Italian artist Matteo del Nassaro, carved the stone so that the red spots in the stone corresponded with the wounds of Jesus. [3] In India, the stone has been believed to be an aphrodisiac and is still powdered and used in their medicines. [4]

Other ancient legends have it that bloodstone had great magical powers, and that it could be used to defeat enemies, assist with invisibility and increase the strength of warriors. [5]

Another old belief regarding bloodstone was that it had the ability to stop bleeding when touched or worn as an amulet. This belief would appear to come from the old "doctrine of signatures" which linked things of like appearance - and to the modern mind it seems highly surprising that such beliefs would persist, given that a simple experiment would be able to verify the matter swiftly. Bloodstone has been named as the "birth stone" for the month of March or the astrological sign of Pisces, and so was believed to bring good fortune to people born in that time. 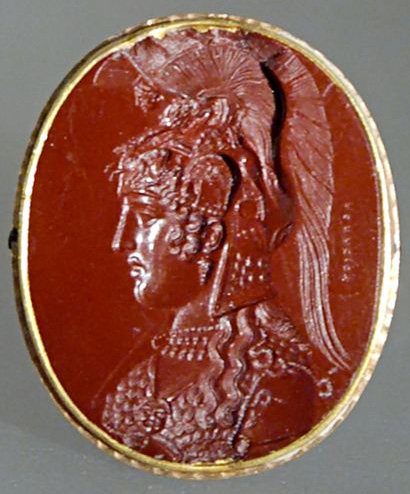