Ametrine is a well-known variety of quartz, with the same overall chemical formula: SiO2 (silicon dioxide). [1] Ametrine is a bi-colored stone - a "hybrid" or mixture of citrine and amethyst - hence the name "ametrine". [1] It is renowned for its quality of having the contrasting colors of amethyst (purple) and citrine (orange-yellow) within the same stone - and ametrine gemstones are typically faceted (or created) in order best to display this attractive quality. The cause of the coloration of ametrine, like that of amethyst, is the result of geological process that are not yet fully understood.

As to the true origins of our pretty ametrine - well, they also turned out to be quite a mystery... 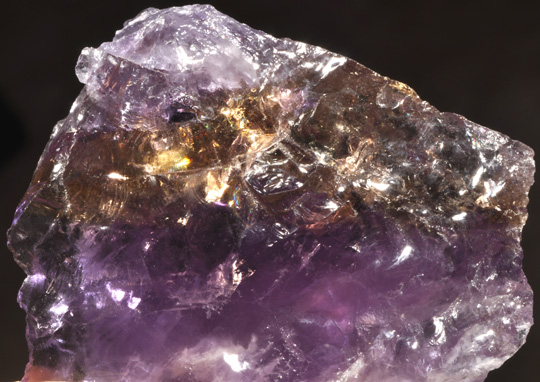 Artificial ametrine can be created by "differential heat treatment of amethyst". It has also been synthesized (lab created). True ametrine is rare in nature, and much of the ametrine on the marketplace, especially the inexpensive, rainbow-bright material, is quite likely to be either lab created or heat treated. [1] Whether the stone has been treated may be very difficult (i.e. cost prohibitive) to ascertain.

Ametrine is a recent name in the world of gemstones. I can find no mention of ametrine prior to the 1980's: For example it is mentioned in the New York Magazine of Nov. 13th, 1989; describing the "bicolor gem" that is half amethyst, half citrine. Ametrine is there described as having exotic color but being no more expensive than amethyst.

Another (quite obscure) name ametrine has acquired is trystine - but this, too is a recent name; appearing for the first time in gemstone publications in the 1980s. It seems as though this may have been a trademarked name - it appears in the 1981 "Official gazette of the United States Patent and Trademark Office"; although Google Books offers only a snippet preview of this document so I cannot easily ascertain its trademark status.

Almost all of the world's natural ametrine is found in Bolivia - and for this reason ametrine is also sometimes known as bolivianite. Bolivianite seems at first glance to be the oldest of these names, appearing in the mid to late 19th century; however, descriptions of Bolivianite of the 19th century seem to be referring to a different mineral: The first mention of Bolivianite I can find is from James Dwight Dana and George Jarvis Brush's 1867 System of Mineralogy - and bolivianite is described as a submetallic lead-gray mineral resembling stibnite. Breithaupt is credited with its introduction to mineralogy. Bolivianite is mentioned in William Crookes' 1875 "The Chemical News" - in a long list of "doubtful minerals" either requiring authentication or under doubt as to whether they even existed. [2] Another source of 1875 describes Bolivianite as an antimonial sulphide of silver [3] . This Bolivianite of the 19th century is clearly not our ametrine!

It turns out that the name Bolivianita was given to ametrine by Rodolfo Meyer Barraza in 1984 and the stone variety was authenticated to be unique to the world at that time. [4]

The world's greatest producer of ametrine is Bolivia's Anahi Mine. It is cheerfully stated all over the internet that this mine became famous when it was given to a Spanish conquistador as a wedding gift - when he married Anahi, a princess of the Ayoreos tribe. [5] Ametrine was said to have been "...introduced to Europe through the conquistador's gifts to the Spanish queen." [6] However, the origin of this tale is conspicuous by its absence - and it has all the hallmarks of a clever marketing tale: I can find no mention whatsoever of the Anahi Mine in searchable literature (ie. Google Books) prior to the 1990s - and it seems highly unlikely that an ancient legend such as this has survived until our time, without even a single written mention. 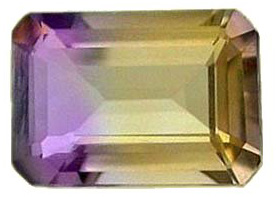 It gets better: One source states that the conquistador in question is "Don Luis Felipe de Urriola": However, this name also does not appear at all in Google's search index until 2006, and only then in unreferenced duplicates of the same "legend".

The Anahi Mine is, at last, described in the 1994 in the Gemological Institute of America's Gems & Gemology. [7] It is stated that "large quantities" of ametrine had recently entered the market; and that much of this material was "originally cut as amethyst".

Another name cited as a possible name for ametrine is "Golden Amethyst". However, no mineralogical publication mentions Golden Amethyst until 1980, when the discovery and first exhibition of "golden amethyst" from Brazil [allegedly] - unmistakably ametrine - is described: "A stone in which deep puple alternates with wedges of citrine colour". [8]

The Ayoreo(s) or Ayoreode Indians of Southeastern Bolivia are real, but are barely described in searchable literature until the 20th century. It is said that they were a small, isolated group. Other references to the tribe as the "Aureiros tribe" appear also to have been falsified as there is no historical reference whatsoever to them under that name. One source, which appears to have its finger on the pulse, mentions that ametrine made its debut in the 1970s, when small amounts of ametrine began to trickle through from the Bolivian mines to Brazilian gem traders; and then onto the world gem market - but that the geographical source of the stones was still obscure at that time. [9] The same website, incidentally, shows a photograph of an entrance to the Anahi mine - which is extremely remote. [10]

It looks suspiciously as though ametrine's "exotic" past may have been a total fabrication - and it seems that even major gemstone associations have been suckered, regurgitating the story of Anahi verbatim without even venturing to question its source! So I'm calling it on ametrine's "ancient origins": I don't think there was ever a princess Anahi, or ametrine gifts to the 17th century Spanish Queen. You heard it here on gemstoneslist.com first.

Ah, the fabrication of mystique - since ancient times the very essence of marketing!

Ametrine possesses many similar mineralogical qualities as regular quartz, including having a hardness of 7 (Mohs). In addition to being found in Bolivia, it is mined in Brazil, and has also been found in Canada, India and the USA. [11]

Back to the Gemstones List home page - over 160 gemstones explored!