Padparadscha is a variety of sapphire with a pink-orange coloration. Its unusual name comes from the Sinhalese for "lotus blossom". Sinhalese is a Sri Lankan language. [1] 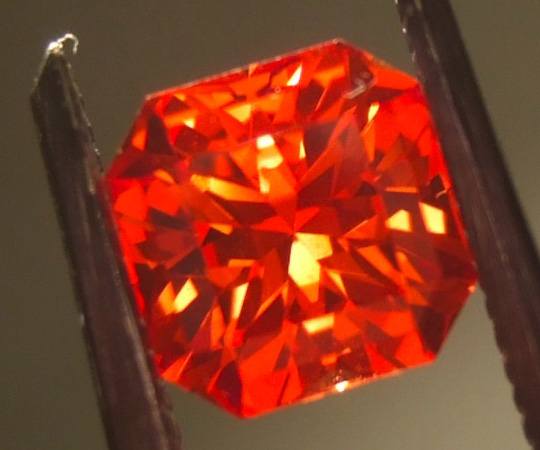 Padparadscha is a very rare and expensive gemstone and is one of only two types of corundum gemstone to be given a distinct name, rather than being called a sapphire of a certain color; the other being ruby. Padparadscha has also been called padmaraga or pathmaraga. [2]

Padparadscha is certainly not a cheap gemstone. Looking at prices online, I saw stones priced between around $700 and $2000 per carat, depending on cut, clarity and color - with most of the stones available seeming to fall within the size range of 1 to 2 carats. True padparadschas over 2 carats are uncommon. I have read also that the finest quality padparadschas might be priced at up to $30,000 per carat - showing that the same "law" applies to padparadscha as to precious stones such as rubies and emeralds: Prices for precious stones in the "upper echelons" of color and clarity can be many times the price of lesser stones. [3]

Some stones are labeled as "padpadscha-type sapphire", which suggests that they may be close in color but not all the way there!

Indeed, there has been some debate as to which stones should be called padparadscha and which should not. Padparadschas were originally found in Sri Lanka and it was once held by some that only pink-orange sapphires from that country should be called padparadscha. However, it has now been agreed upon by leading gem laboratories that the location of the stone's discovery does not matter to the qualification, and that the color (and lack of treatments) should be the deciding factor. [4]

Padparadscha gems, like all other sapphires and rubies, are composed of corundum (Aluminium Oxide Al2O3), which has been colored by mineral impurities. Rubies acquire their color from chromium ions - and trace amounts of other elements such as titanium or iron can give rise to the wide range of possible sapphire colors. So the question has been one of where to place the "boundary" of when a stone should be named padparadscha.

It has now been agreed upon (2006) by the prestigious Laboratory Manual Harmonization Committee that to qualify as padparadscha, the sapphire must contain both pink and orange tones, and no other "color modifiers". [4] Stones that are entirely pink fall under the banner of "pink sapphire", and stones that are in the yellow / orange range with no pink at all, are called "yellow sapphire" or "orange sapphire".

For a less expensive alternative to padparadscha, pink tourmaline has been suggested as it is possible to find tourmaline stones with similar color. [1]

The largest gem-quality padparadscha yet found weighs 100.18 carats and is in the American Museum of Natural History.

As with all of the more expensive gemstone varieties, expertise is paramount in selecting stones. Care should ideally be taken to find completely natural padparadscha that has been certified by a respected gemmological laboratory, as stones are known to be sometimes heat enhanced or treated in other ways.