Blue Garnet has the special distinction among garnets that it is considered the rarest. Until the 20th century, no blue garnet had ever been found and it was even said that garnet could exist in "every color but blue". However in 1990, blue garnet was unearthed in Bekily, Madagascar and identified by the well-known gemologist Richard Wise. [1] Blue garnet is still a rare stone and can fetch high prices. 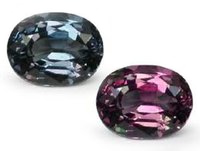 Blue garnet is a pyrope-spessartine garnet renowned for its color-change, which is very like that of alexandrite - the stone will appear purple under incandescent light, whereas in daylight it is blue to blue-green-grey. Blue garnet has sometimes been called alexandrite garnet [1] for this reason - but note that alexandrite is a completely different mineral - a type of chrysoberyl.

The 1990 Madagascar find noted above was not the first observation of blue garnet: Crowningshield identified a "waterworn pebble" as blue garnet that was submitted to the GIA for analysis in 1970. This stone exhibited color change from blue-green in daylight to purple-red under incandescent light; and the stone was identified as a pyrope-spessartine garnet in the 1980s. [2]

Since that time, blue garnet has been found in a few other places - however it is one of the rarest of all gemstones and has been known to fetch very high prices: The highest of these was said to be a sale in 2003 of a 4.2 carat blue garnet for $6.8 million. [3] However, I can nowhere online find the original report for this sale; only seeing the obligatory duplication of information by innumerable web pages without either ascertaining or providing a source reference for their information. If anyone can verify this saile, please let me know. Otherwise, I am filing that one under "rumor".

Blue garnet is said to be extremely rare over 1 carat and in fine grade - and most blue garnets of larger size than this appear too grey and lacking in clarity. [1] Blue garnet has been found in Tanzania, Madagascar,

Here is an explanation for the colors and color change caused by the various ions that exist as "impurities" in stones: The various mineral ions absorb light of certain spectra, depending on the element or mix of elements present. In the case of blue garnet, chromium and vanadium absorb the light from the middle of the spectrum, allowing reds and blues to pass. As sunlight contains more blue light than red, the stone appears blue in daylight - whereas incandescent light is noted for its lack of the blue spectrum - and so the stone will appear purple - red. [5] [7]

Not much blue garnet is seen for sale. It's truly an uncommon gem. Have seen a handful for sale online, the asking price for color change blue garnet (ebay) seems to be around $500-1000 / carat. Other retail prices may well be higher. 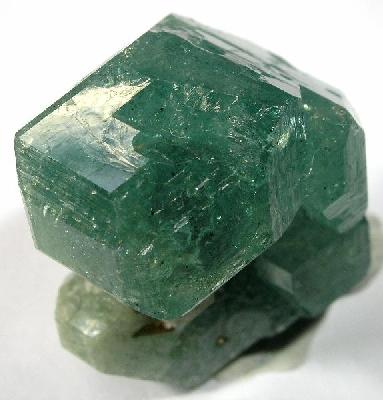