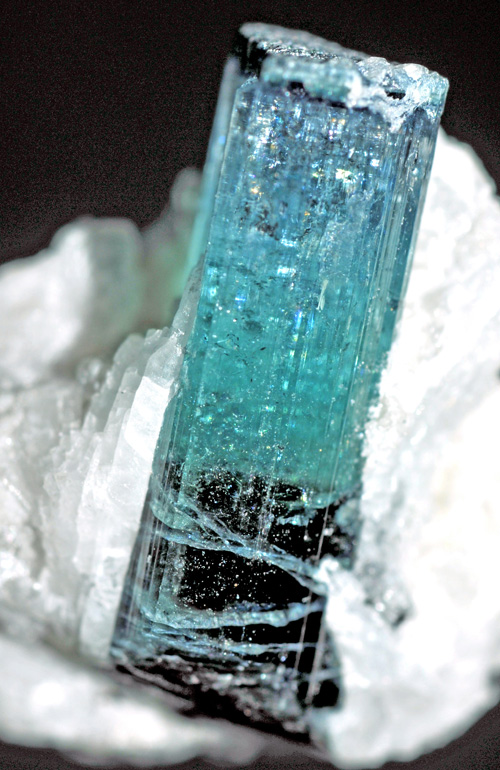 Indicolite
- on albite matrix. From Pakistan

Indicolite was named because of its indigo coloration. The best and most valuable indicolite is considered to be that of a pure blue color, though this is uncommon and much of the material labeled as indicolite will contain shades of green. Some indicolite can appear very dark blue, truly an indigo color - however stones with higher clarity (and therefore somewhat lighter than this in color) may be more valuable. By definition, indicolite is now considered to be that which is "more blue than green"; but of course this leaves some room for subjectivity. As indicolite may fetch a higher price than 'green tourmaline', some green tourmaline that is not indicolite is labeled as such. [1]

Due to its uncommonly rich blue color, indicolite is sometimes used as a less-expensive substitute for sapphire. It has been found in several locations worldwide including in Afghanistan, Australia, Austria, Brazil, the Czech Republic, France, Germany, Pakistan and the USA. [2]

Indicolite was first named around 1800, and the earliest mention of it I can find is in natural history publications of that year. It then begins to appear regularly in mineralogical writings. The noted mineralogist Rene Just Hauy mentions it in 1802, stating that it was named by d'Andrada, who believed it to be a unique mineral species. Hauy recognized it as a variety of tourmaline. D'Andrada was a Portuguese mineralogist and a pupil of Werner who lived from 1763 to 1838 [3] and is best known through andradite, which was named after him.

Indicolite crystals in their natural state are prismatic, like other tourmalines, and often appear striated. Like other elbaites, indicolite is pleochroic, meaning that it can show different colors when viewed from different angles. In particular, indicolite appears darker when viewed down the length of the crystal. Elbaite has the chemical formula Na(Li,Al)3Al6Si6O18(BO3)3 (OH)4[4]

Indicolite of a violet-blue color has been found in eastern Siberia and this has been named Siberite. Another variety worthy of note is Paraiba tourmaline, first found in Paraiba, Brazil. [5] Paraiba tourmaline (when blue) is said however to have an intense color that is "beyond" that of indicolite. [6]

Indicolite prices: Indicolite of the finest quality has a bright, electric color and can be seen for sale in various shades of blue, often with shades of purple or turquoise. True indicolite is an uncommon stone. Vivid, clear, well cut, authenticated stones can command prices of $100-$600 per carat (March 2011) and such stones are typically in the size range of 3-10 carats. Stones over 10 carats are uncommon, although cut indicolites over 100 carats do exist.

Lesser stones can be obtained far less expensively, down to just a few dollars. It is said that much of the indicolite on the market nowadays is heat treated as this will enhance the blue color and lessen the green. Some indicolite may have been irradiated - and it's said that this may be detectable if a batch of the tourmalines all have unusually similar color. Also, most of the stones that are treated, are treated after the cutting has been done - so it is much less likely that uncut stones will have been treated. [1] 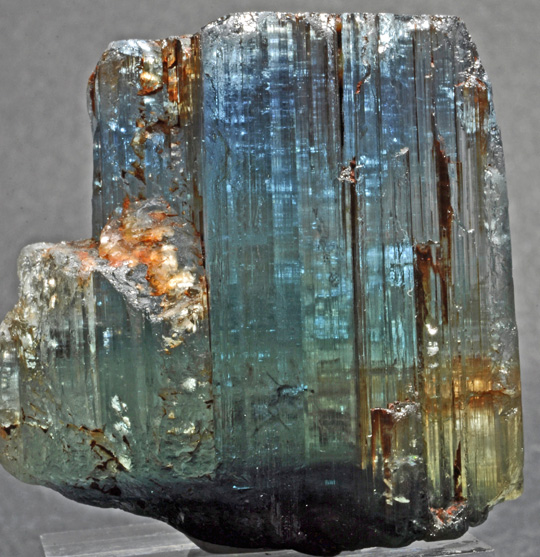 Please feel free to link to this page - copy / paste the text below:
(click to select)