Hessonite is a variety of grossular (aka grossularite), which in turn is a type of garnet. Hessonite is usually shades of red-orange or orange-brown in color, often with a "honey" shade, and has the chemical formula Ca3Al2Si3O12. It is also sometimes known as "cinnamon stone" on account of its "burnt orange" / cinnamon color, which derives from iron impurities. 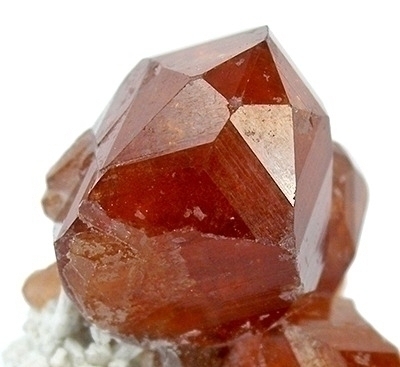 Hessonite is often cut into a faceted stone or cabochon for use in jewelry. It has a hardness of around 7 on the Mohs scale; slightly less hard than most other garnets which are around 7.5 - but, being around that of quartz, still sufficient for jewelry use. It is in reference to its lesser density and hardness that hessonite was given its name - as the Greek word for "inferior" or "lesser" is "hesson".[1]

Hessonite crystals are very often striated - marked by a pattern of parallel lines. This can be seen clearly in the first of the images below.

Hessonite is similar to the gemstone zircon - and many gemstones once thought to be zircon were later shown to be hessonite by virtue of their lower specific gravity, the test of which is held to be a good way to distinguish the two. [1]

Hessonite is found in a number of places including: Sri Lanka, Brazil, India, Canada, Tanzania, Madagascar, Australia, Austria, Czech Republic, Gemany, Italy, California and some other states in the USA. [3]

In the traditional practice of Vedic Astrology, the gem Hessonite is held to be of special significance. It is one of the nine planetary gemstones and represents the mystical planet Rahu, the "north node of the moon". Vedic Astrology prescribes specific times or astrological configurations for the wearing of Hessonite. [4] Hessonite is called "Gomeda" in Sanskrit. [5]

Looking at prices online, deeply colored faceted hessonite gemstones of around 2-4 carats seem to be priced around $100 per carat (Sept 2010) while paler colored stones are around $50-70 per carat. [5]

Hessonite was brouht back to Europe from Ceylon (now Sri Lanka) at least as early as the late 18th century, possibly before. It was evidently known to the inhabitants of Ceylon, nicknamed "the land of gems", by that time - but the date of its first discovery may never be known.

Which of these names came first? The name "Hessonite" appears to date from the 1820's, when it begins to appear in literature: Hessonite is discussed in full in volume II of Friedrich Mohs' 1825 classic Treatise on Mineralogy. [7] At that time, he states that it was difficult to distinguish it from other species of dodecahedral garnet. He lists several other names for the stone - including Prismatic Garnet, Kaneelstein (German for cinnamon stone) and Idokras (although, confusingly, other sources state that this is a German pseudonym for vesuvianite).

Cinnamite appears to be the French name for the stone - and is mentioned in 1806 in Jean André Henri Lucas and René Just Haüy's Tableau Méthodique des Espèces Minérales. [8]

The term Cinnamon stone appears to be one of the most ancient of the names in the list above, sourced from Mindat: Cinnamon stone is mentioned in William Fordyce Mavor's 1797 "Historical account of the most celebrated voyages, travels, and discoveries" as having been one of the precious stones purchased by Charles Peter Thunberg in his 1777 voyage to Ceylon. [9] Thunberg himself, writing in 1794 of his travels, lists Kaneelstein - and other sources of the early 1800's state that this name was given to the stone by Werner, on account of its cinnamon color. Werner was a celebrated German geologist who lived from 1750-1817 and wrote several texts on mineralogy in the late 18th century. 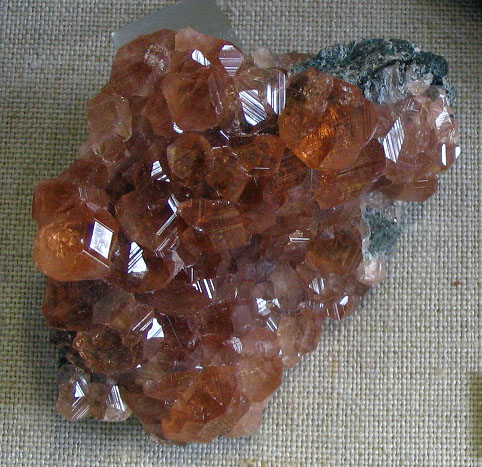