Chrome Diopside, also sometimes known as chromian diopside, is a type of diopside with a vivid green color caused by the presence of chromium ions. Diopside is a pyroxene mineral with the chemical formula MgCaSi2O6 - magnesium calcium silicate. Chrome diopside's chemical formula is written (Ca,Cr)MgSi2O6 - and this reflects that the chromium ions substitute for the calcium in the mineral's molecular structure. 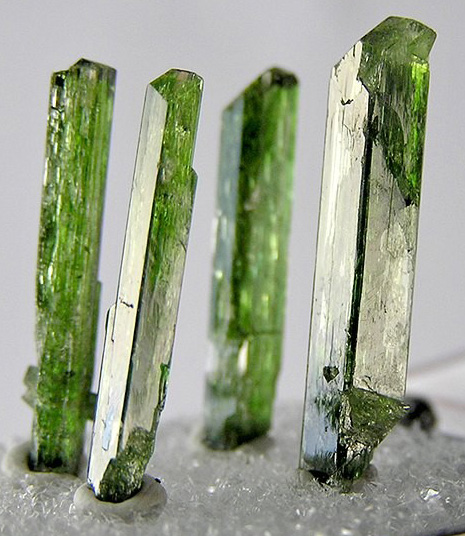 Diopside forms prismatic crystals, somewhat reminiscent of those of tourmaline. It may also be found in granular form. Although chrome diopside is somewhat soft by gemstone standards (5.5-6.5 Mohs) [1] it is nevertheless used as a gemstone on account of its rich green color. It is however generally considered better suited to settings such as earrings rather than rings or bracelets, which generally take more wear and tear.

Partly as a result of the rich coloration of chrome diopside, gemstones are generally on the smaller side; larger sizes are often too deep a shade of green. Chrome diopside has a higher refractive index than emerald, which means that it is possible for stones to display higher "sparkle". It's said that chrome diopside is somewhat difficult to facet, owing to its two planes of cleavage. [2]

Diopside has also been found in a few other interesting forms: One is star diopside, which displays asterism and is mainly found in India [4]. Star diopside is typically black or a very deep green, and is unusual in that it displays a four pointed star, as opposed to the six-rayed star of star ruby or star sapphire. [5]

Another type of diopside is diopside cat's eye, which displays the phenomenon of chatoyance. [6]

A further variety of diopside is violane, found in Italy, Greece and the USA, which contains manganese and is colored violet to pale blue. [1] [6]

The primary source for fine gem quality chrome diopside is Russia. This has been known to be nicknamed "Russian emerald" - although it must be noted that chrome diopside and emerald are two completely different stones.

Chrome diopside is one of a few gemstones with a rich green color - and may for example make a much more affordable alternative to tsavorite or emerald: Looking around online (Sept 2010), chrome diopside seems relatively reasonably priced, retailing at around $50-100 per carat for stones in the 0.5-2ct range. 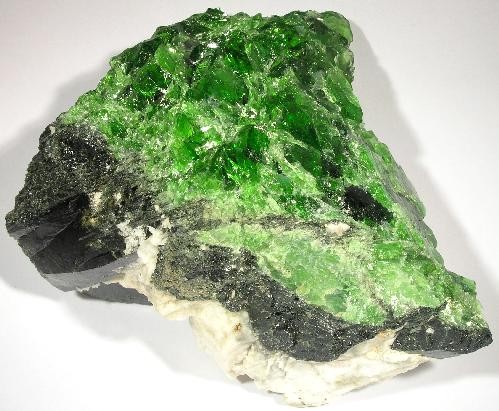