Beryl is a class of gemstones that have the chemical formula Be3Al2(SiO3)6 - beryllium aluminium cyclosilicate. [1] Some important and famous gemstone varieties are types of beryl. 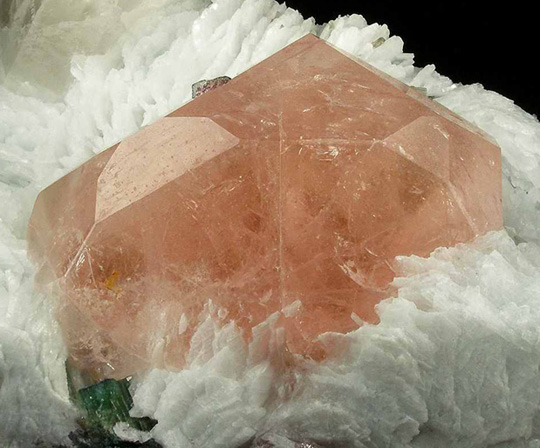 Beryls are typically hard (hardness 7.5-8 on the Mohs scale) and often suited to the fabrication of cut gems. Beryl is a cyclosilicate and beryl stones can often occur in the attractive form of hexagonal prisms.

Bixbite (aka. Red Beryl) - colored by manganese (Mn3+) impurities. Bixbite / Red beryl is extremely rare and has only been found in a few locations worldwide. Prices for top quality faceted red beryl have been known to be $10,000 per carat [1] and the best material is said to come from rhyolites in Utah, USA. [2] [3]

Emerald - emerald green, of course! The most valuable beryl. Green color comes from chromium impurities. Emerald is more prone to flaws than other beryl varieties and large flawless stones are rare.

Goshenite - "pure" beryl, colorless - no mineral impurities. Relatively inexpensive and not typically used as a gemstone. It has on occasion been found fraudulently backed with green foil in a sly attempt to pass it off as high-grade emerald, which, also being a beryl, has many of the same physical properties.

Maxixe (pronounced Mah-she-she) - this deep indigo / cobalt blue beryl was discovered in 1917 in Brazil. The color fades quite quickly on exposure to light and the original mine was abandoned, its location then being lost. Maxixe has a realistic claim to being the most mysterious of the beryls: Even after extensive testing in 1974, the Bell Laboratory was not able to ascertain the exact cause of its color. [4] Maxixe has been found to contain impurities of iron (predominantly), caesium, zinc, lithium, rubidium and boron. [5]

Morganite (aka pink beryl, pink emerald, rose beryl) - colored pink by manganese impurities. Named after J.P. Morgan, banker and mineral collector. Morganite also contains caesium and lithium, but these are not believed to be responsible for its coloration. Morganite is generally one of the more costly beryls; though not as expensive as emerald. [2] The color of morganite fades after prolonged exposure to sunlight, thus rendering fine, intensely colored stones more rare. [6] Although sometimes found flawless, morganite often contains minor inclusions. Morganites may have been treated with oil in order to mask flaws - and such treatments should be declared by sellers.

Depending on the minerals present in the beryl, there may also be more or less flaws. Emerald is typically brittle, and less often flawless than other beryl varieties. [1] This is because the chromium ions responsible for the coloration of the emerald, have the effect of weakening the crystal's structure, rendering brittle and highly prone to flaws. Aquamarine sometimes produces large, flawless gems: a flawless 879.5 carat step cut aquamarine is in the British Museum of Natural History. [2]

It's important to note the subtle distinction between beryl and beryl group minerals, which can be a cause for confusion. Beryl has the chemical formula Be3Al2(SiO3)6 as mentioned above. All the gemstones listed above are varieties of beryl, having the same overall chemical formula but slight impurities giving rise to the various color varieties. The beryl group - below - contains four (or five) minerals:

Bazzite - Be3Sc2Si6O18 - Deep blue or blue-green in color; the coloration being caused by scandium. Rare. 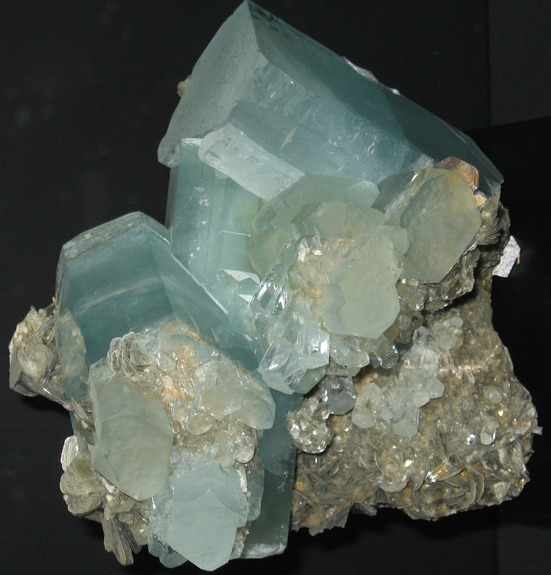 Beryl from Gilgit, Pakistan.
Photo by Gia.cossa - lic. under CC-BY-SA-2.5