Rutilated quartz is a variety of quartz that has needle-like (aka. "acicular") inclusions of rutile inside it. These needles can be colored brown, red, golden to black, or combinations of these hues. Rutilated quartz has also been nicknamed Venus' Hair Stone, Needle Stone and Fleches d'Amour ("Love darts"). [1] 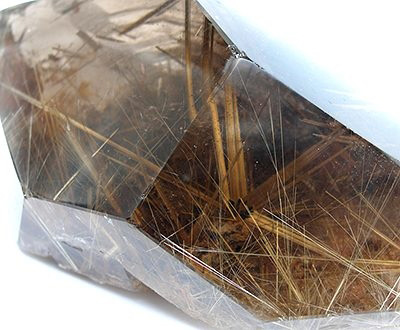 Rutile is mainly composed of titanium dioxide and has a hardness of 6-6.5 (Mohs). Needles of rutile inside rutilated quartz may be aligned in the same direction as each other or may be scattered in random directions. As can be seen from the images below, stones in their natural state may have protruding needles of stone and these might be very sharp, as well as fragile. This may present a hazard to those handling the stones. However, in some cases the rutile inclusions may be completely encased in clear quartz and do not reach the surface - such as the stone in the second image.

Pieces of rutilated quartz are sometimes cut and polished in order better to display the stone's visual effect - and it is common to see rutilated quartz cabochons and other shapes in jewelry designs.

Rutile is also the mineral responsible for the phenomenon of asterism in "star" gemstones such as star sapphire and star ruby. However, in this case the rutile needles are so fine as to be hair-like or thinner: Microscopic, hair-like needles of rutile aligned along different structural planes within a stone cause it to reflect a star of light when the stone is viewed under bright light. [2]

Rutilated quartz is found in several places in the world including the USA (several states), Madagascar, Austalia, Brazil and Austria. [1]

It is possible to create synthetic rutile crystals in the laboratory - and when pure these can be transparent. These have been known to have been used as imitation diamonds. [3]

Other types of acicular inclusion are possible in quartz - with minerals other than rutile forming needles within the stone. The most well known of these is probably tourmalinated quartz - and in appearance this is similar to rutilated quartz, only the needles are of black (schorl) or dark green tourmaline. Another name that has been used for quartz that features needle-like or hair-like inclusions (of whatever type of mineral) is sagenitic quartz. Other possibilities for minerals that the needles are made of, include epidote, goethite and hornblende. [4]

Although rutilated quartz is not particularly uncommon, and has likely been known about since ancient times, the earliest mention of the phrase rutilated quartz I can find comes from the 1806 Transactions of the New York Academy of Sciences, Volume 14. However, this volume informs us that at that time it was also called Sagenite. Sagenite was mentioned previously by the famous mineralogist René-Just Haüy in his 1801 Traité de minéralogie ("Treatise on Mineralogy"). He devotes a section to rutile, and says that the name sagenite was given by Saussure, who had observed the mineral on Mt. St. Gothard (Switzerland). This name derives from the Greek word sagene, which means "net" - in reference to the appearance of the network of needles traversing the stone in different directions.

Prior to this, it appears that the mineral was referred to simply as rutile; and the only previous mention of this I have found so far is from Achille Delesse's 1761 Etudes Sur Le Metamorphisme Des Roches ("Studies of Metamorphism in Rocks"). Delasse understood that rutile was a titanium oxide mineral. [5]

George Frederick Kunz, the noted mineralogist and writer, gave a good description of a find of rutilated quartz in his 1890 Gems and Precious Stones of North America: "Rutilated quartz of unexcelled beauty, the rutile usually brown, red, golden, and black, has been found in many places in ... North Carolina. In 1888, crystals of quartz, 3 inches in length, and filled with rutile the thickness of a pin, were found at Stony Point." 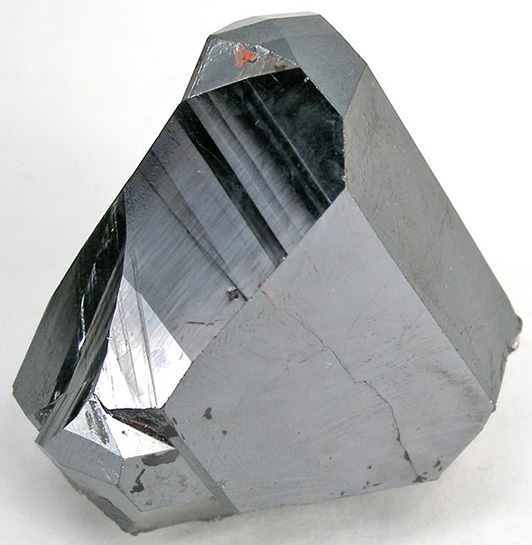 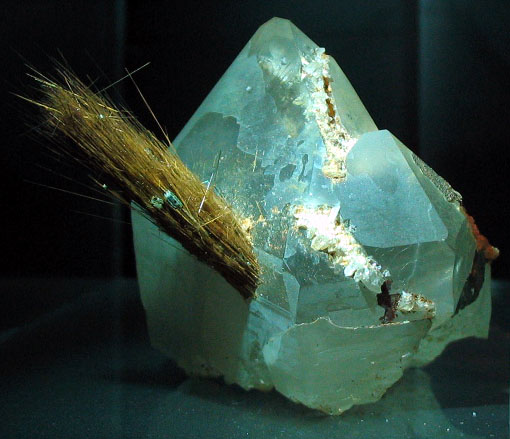 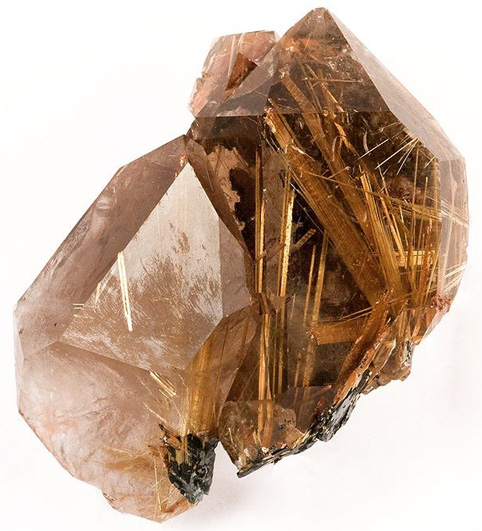 Rutilated Quartz
From Brazil. 7.7 cm in length. In its natural state, not polished or treated.
Photo by Rob Lavinsky, iRocks.com - image lic. under CC-BY-SA-3.0