A Star Ruby is a type of ruby that displays the optical phenomenon known as asterism. Star rubies reflect a six-rayed "star of light" pattern when viewed from a single bright light source (either sunlight or direct spotlight of any kind). 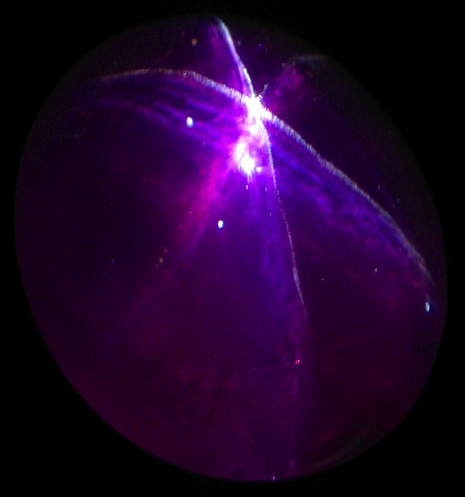 The asterism effect is due to inclusions of ultra fine fibres of rutile (titanium dioxide) in the ruby. The star seen in a star ruby usually has six rays and this is because the rutile fibres are structurally aligned in three directions within the hexagonal crystal structure of the stone. As a result of the presence of rutile, "star stones" are typically less transparent. [1]

Occasionally, a star ruby may display 12-point asterism or a double star; such as in the case of the “Neelanjali Star Ruby”.

Like other rubies, star rubies are made from the same overall substance - corundum, which is the crystalline form of aluminium oxide. It is a very hard gemstone, having a hardness of 9.0 (Mohs).

In order to best display the star effect, star rubies, like star sapphires, are often cut en cabochon (i.e. with a domed top and flat underneath). [2] It is very rare to find a star ruby with the combination of perfect color and perfect star - and the stones with the best star are often slightly lighter, reddish-pink.

Star rubies can now be created in the laboratory and these are often seen for sale.

Asterism can vary in intensity - with the most valuable gems being the ones with the strongest "star effect". [1]

I have also read other reports of giant star rubies, such as the 3553-carat “Raviratna Star Ruby”, the 2475 carat “Rajaratna Ruby” and the 1370-carat “Neelanjali Star Ruby”. Reported to have belonged to the Kings of the Southern Indian Vijayanagar Empire, these stones are believed to be of Indian origin - but the exact source remains unknown. However these star rubies are said not to be of "fine" quality such as the stones listed above them - and it is also said that these stones have not been seen by journalists / verified. A furher giant ruby called the "Eminent Star Ruby" weighs 6465 carats but its quality is said to be poor.[3]

Star rubies come from several countries including Myanmar (Burma), India, West Africa, Vietnam, Cambodia, Tanzania, Kenya and Sri Lanka. Prices are very variable depending on the clarity and color of the ruby, and the quality of the star effect - but looking online (Sept 2010), prices seem to be ranged around $100-400 per carat for stones in the 3-12 carat region. [4] As with other "regular" rubies, the "pigeon blood red" color - a very bright and pure red - is considered the most precious and valuable.

Back to the Gemstones List home page - over 160 gemstones explored!