Aventurine is a form of chalcedony, which in turn is a form of quartz. Aventurine is usually thought of as being specifically green - but it can also be white, grey, blue orange or other colors. Aventurine gets its color from inclusions of other minerals; and the typical green color that most people associate with aventurine, comes from inclusion of fuchsite [1], a chromium-containing mica, which has the delightfully complex chemical formula K(Al,Cr)2AlSi3O10(OH)2. [2] 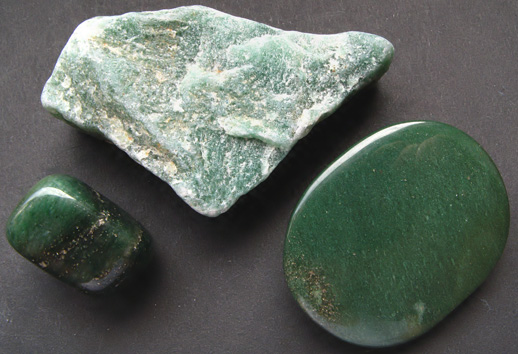 Quartz is the most abundant mineral on earth, and it comes in two forms - macrocrystalline, in which individual quartz crystals are at least large enough to be discernible with the naked eye, and cryptocrystalline, in which the individual crystals are only discernible under magnification. [2] Aventurine is composed of a cryptocrystalline quartz variety - and its glistening effect, caused by inclusions of other minerals, is known as aventurescence. [3]

In the past, aventurine was sometimes called Indian jade, although this is a misnomer - as aventurine is not a type of jade. The two minerals can be discerned apart by their specific gravity or refractive index. [2]

Much of the aventurine mined is used for carving and bead making, with a small number of the finest stones being cut into cabochons for jewelry-making. Some aventurine is also used in monumental architecture. [1]

It is known that Aventurine is sometimes treated with oil or dyed in order to enhance it's attractiveness to the consumer. [4] As always, buyer beware.

Aventurine is found in Brazil, India, Austria, Russia, Spain, Chile, and Tanzania; with the majority of the blue-green stone coming from India. Folklore maintains that the stone has a calming quality and brings fortune in games of chance (the name "aventurine" derives from the Italian phrase "a ventura", meaning "by chance" - and refers to the accidental discovery of aventurine glass in the 18th century). [1] [5]

Note that aventurine should not be confused with sunstone, a completely different mineral which is sometimes also called aventurine feldspar.

Aventurine is relatively inexpensive and I have just seen (Jan 2011) aventurine rough for sale online for a few dollars a pound. [6] 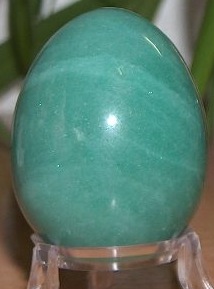