Opal is the national gemstone of Australia and although most commonly green or white, opal can occur in (and reflect) almost any color imaginable - as can be seen from the photos above. [1] Opal's structure is not actually crystalline, and so it is classified not as a mineral but as a "mineraloid gel"; composed of microscopic spheres of silica (SiO2) packed together in a lattice. Opal also contains varying amounts of water in addition to the Silica in its structure [2] - typically 3-10%, but sometimes as high as 20%. 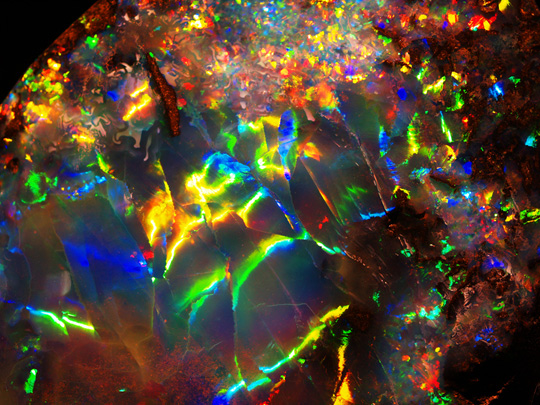 There are many named varieties of opal, and these have been categorized into three main groups. The first, precious opal, which can occur in many colors, is famed for its play of color effect, caused by diffraction of light within the lattice of silica spheres. This "rainbow" effect should not be confused with opalescence, which is the cloudy haziness or "milkiness" of pale "potch" or common opal. Precious opal sub-varieties include white opal, black opal, boulder opal, jelly opal, harlequin opal and crystal opal.

The second main category of opal is fire opal, which despite its name, does not display the play-of-color effect. It is named for its orange color and is often cloudy, with the best specimens being transparent orange. These stones are sometimes faceted as gems [4] and one of the most significant producers of fire opal is Mexico. [1]

The third main category of opal is common opal. This also has the nickname "potch", and is simply any opal that doesn't belong to either of the first two categories. It doesn't display the play-of-color effect. Common opal sub-varieties include agate opal, angel skin opal, honey opal, hyalite (colorless and clear), hydrophane, porcelain opal, girasol, wax opal. [4] [5]

Hydrophane is opal that once had color play but has become turbid (cloudy) through loss of water. If it absorbs water again it becomes translucent, and this causes the play of color to return. [5] In many cases, opal can become brittle or lose its play of color if kept too dry - however being worn next to the skin provides it with the moisture required for it to retain its color. Some opal nowadays is sealed with protective resin. [5]

Most of the world's precious opal is produced in Australia, and it's considered that around 95% of the world's fine opal comes from that country. It was first found there in 1849 [5] and prior to the rise of Australian opal, the best opal came from Slovakia. There are opal deposits in many locations around the world - including Nevada, USA where a variety of precious black opal is found. The black fire opal is the state gem of Nevada. Other prominent locations around the world for opal include Hungary, Indonesia, Ethiopia, Canada, China, Czech Republic, Slovakia, France, Germany, Hungary, Italy, Brazil and other places in the USA. [6]

In 1974 it was discovered how to synthesize opal, and it is now manufactured. However, much of the synthetic opal contains other materials, such as plastics, and is categorized as "imitation opal". One of the better tests of genuine opal is fluorescence - and genuine opal will show better fluorescence under UV light. [2] 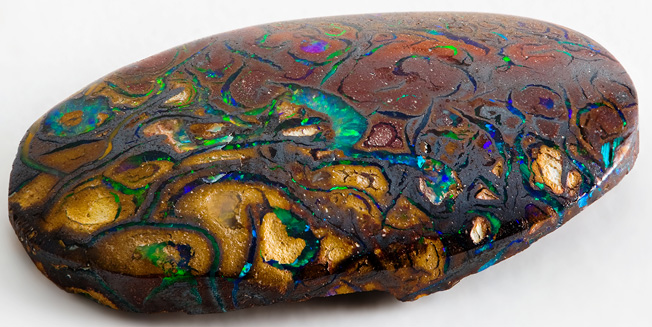 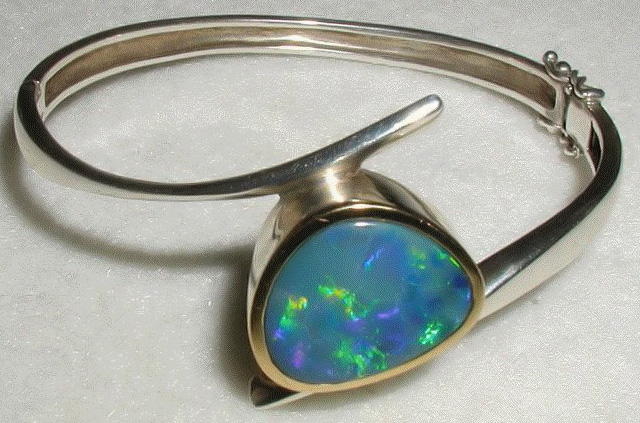 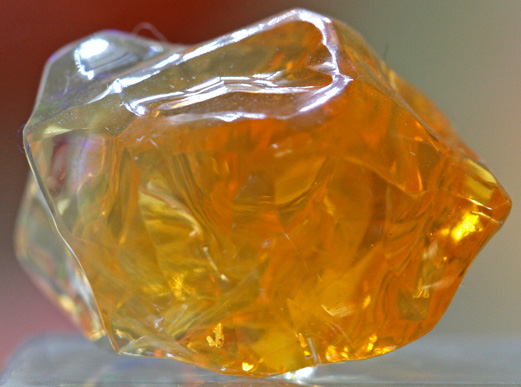 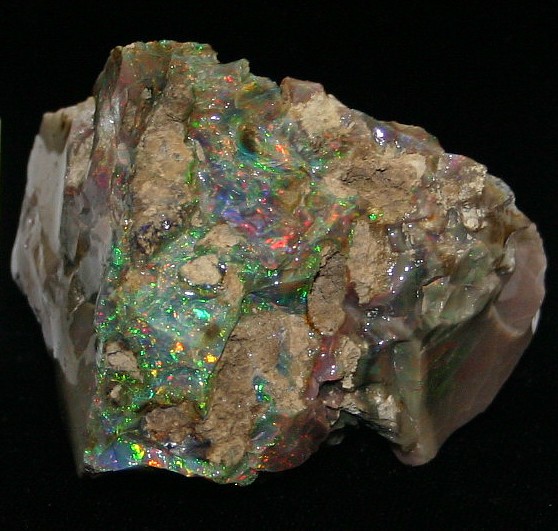 "A rose of fire shut in a veil of snow;
An April gleam athwart a misted sky:
A jewel - a soul! Gaze deep if thou wouldst know
The flame-wrought spell of its pale witchery."
-- Ednah Proctor Clarke, "An Opal", 1896.