Seraphinite is the name given to the gem-grade quality of the mineral clinochlore, which is also sometimes known as Chlorite Jade (although it is not jade). Seraphinite is typically dark green to grey in color, chatoyant (has the "cat's eye" quality due to the presence of rutile), and was said to have been given its name due to feather-like shapes of inclusions typically found within the stone - which in some cases give the stone the resemblance of a feathered wing. A Seraph was a winged angelic being in the Old Testament of the Bible.[1] 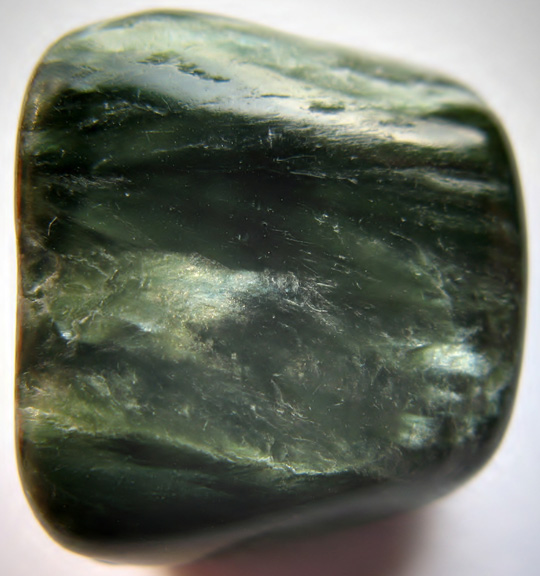 Seraphinite has the chemical formula (Mg,Fe2+)5Al(AlSi3O10)(OH)8 [2] It crystallizes in the monoclinic crystal system. Seraphinite is a soft mineral (Mohs 2-4); so it is well suited to the creation of small, shaped decorative objects such as beads and pendants. It polishes well but care must be taken not to damage it as it is not as hard as many other gemstones.

Seraphinite is widespread throughout the world, occuring naturally in many places and over 1300 are listed by Mindat. It has been found in association with numerous minerals, including serpentine, pyrite, albite, fluorapatite, anatase, quartz, calcite, rutile and plagioclase. [3]

The chlorite group of minerals, of which seraphinite is a member, are phyllosilicates. The name chlorite (and the 'chlore' in clinochlore) derives from Greek and means 'green'. [3] It has the same root as the word chlorine, but note that the chlorite mineral does not contain chlorine. There is potential ground for confusion here as sodium chlorite, a chemical used in paper manufacturing, contains chlorite (ClO2) ions but does not contain chlorite mineral.

The Type Locality for clinochlore (location from which the first named specimen originated) is stated by Mindat to be chester County, Pennsylvania, USA - and the date of this find to be 1851. [4] Its discovery has elsewhere been attributed to Nikolay Koksharov (1818-1893), a Russian mineralogist and cystallographer. [1]

However, the 1851 edition of The American Journal of Science and Arts prints an article by W.P. Blake, in which he states that he was first shown the new mineral by Professor B. Silliman, Jr. in September 1850. Silliman had received the specimen from "Thos. F. Seal of Philadelphia". Blake subsequently examined the material from Chester County in May 1851, having received a specimen from Professor J. D. Dana. The source of Silliman's specimen was not known, but Blake was in no doubt that it was from the same locality. It was Blake who proposed the name Clinochlore for the mineral species, in the article reproduced in the American Journal of Science and Arts. [6]

The name seraphinite is a very recent one, and the earliest mention of it in literature (Google Books search) appears to be from the GIA's Gems and gemology, 1996, where seraphinite is stated to be a new trade name for the mineral. [5]

Seraphinite is widely available for sale online, commonly in the form of cabochons, beads and pendants of various shapes. It is inexpensive (March 2011), with seraphinites of 40-50 carats priced under $20.