Diaspore is an aluminium oxide hydroxide mineral with the chemical formula a-AlO(OH). It often occurs in lamellar form (thin plates or scales) but sometimes also forms crystals such as the ones shown in the images. 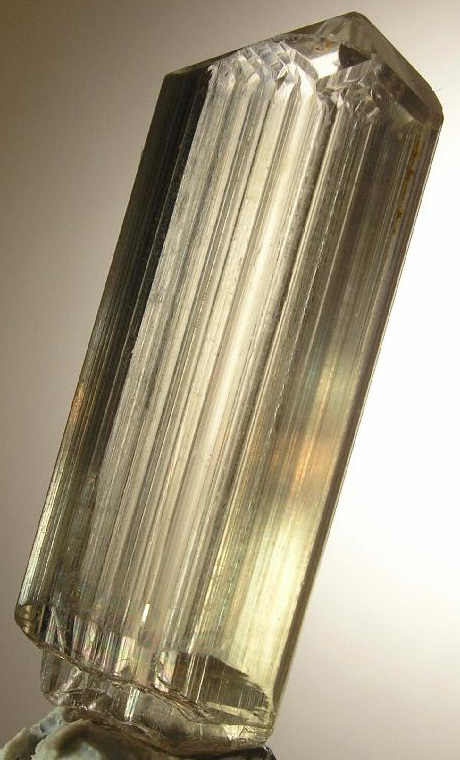 These crystals as sometimes used as gemstones - however much of the diaspore found is not of gem quality. Diaspore is a component of bauxite - an aluminium ore used industrially to obtain aluminium. Diaspore has also been called empholite, kayserite or tanatarite. [1]

Another set of gemstones that are formed from an aluminium oxide is the corundum stones - sapphire and ruby, which are composed of Al2O3. However, these stones are quite different from diaspore.

Diaspore is isomorphous with goethite - meaning that it has the same or fundamentally the same crystal shape. It also has the interesting quality of making crystal "twins" that are heart-shaped or "fishtail" shaped in cross section. Diaspore has perfect cleavage in one direction - and it is said that this is a major reason why it is one of the most difficult gemstones to facet. [2]

Diaspore also sometimes has the unusual quality of exhibiting a color change effect under different forms of light. The stone itself can occur in colors amber, white, brown, colourless, pale yellow, greyish, lilac, violet, pinkish [1] [3] - however under varied light conditions it can show color change between the green and red spectra. The color change characteristic is stronger in larger stones. A similar color change phenomenon can also be seen in the stone alexandrite.

As with alexandrite, the diaspore color change is considered a highly desirable gemstone quality which can lead to greatly increased prices at retail. Diaspores with good clarity, color and color change characteristic can command high cost: Looking around online (August 2010), I just saw a 4.68 carat diaspore priced at $4680 ($1000 per carat.) However, smaller stones with lesser or no color change can be seen at much lower prices, and I have seen a 1.99 carat stone priced at $70.

I have read that care should be taken when buying color-change diaspore online; as it has been known for photos to be altered to show color change. [2]